This is a rant post, and is purely my own opinion.

Now I'm sure that Google have done their customer research. I'd hate to think that someone sat in a room and said "Apple have a 6-inch phone and people rave about it so we have to have one too." I own a Nexus 6 (not the new P model) and, whilst it's a nice phone, it's too big. 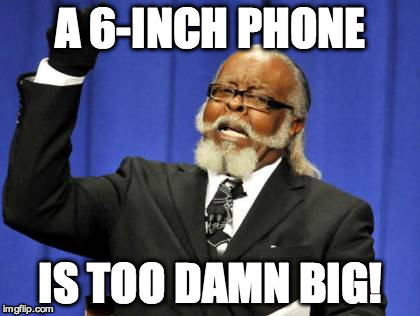 "So get a 5X," I hear you cry. But the spec is so much worse. If they must have a 6-incher what's wrong with two phones with the same spec but with different screen sizes?

And what's with the removal of wireless charging? I've seen the post explaining that the USB-C connector is better, quick charge is wonderful, and it allows them to make the phone a millimetre or so thinner, but sorry, that doesn't cut the mustard.

Some of us have invested in a number of wireless charging plates in strategic places (in the office, by the bed for overnight charging, even an in-car mount with wireless charging) -all now useless. Quick charging can't beat the convenience of just plonking the phone down on a mat and having it charge. I've never had to quick charge my Nexus 6 because the wireless charging means it's always kept charged.

And by the way Google - where is the next generation of Nexus 7? I like to have my phone as my phone and a tablet as a tablet. My N7 is my main device. Big enough to be used for just about everything, small enough to fit in a coat pocket or even the back pocket of my jeans.

I know there are many, many manufacturers of Android devices and I could get something that meets my requirements from Motorola, HTC, etc. But they aren't Nexus devices. There's a reason why I buy Nexus; pure, unadulterated Android that gets updated direct from the source.

So, end of rant. Thanks for listening.